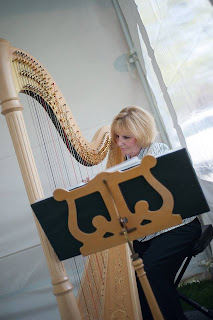 Born and raised in Fremont, Ohio, Karen Svanoe Westgate began her musical studies at the age of seven on the piano. Her mother's dream was for her to play the harp and at the age of thirteen, a used harp was purchased for her and weekly treks to Swanton Ohio were taken to study with Lillis Carson.

As there were no harp teachers at her college, Karen graduated with a degree in sociology from Biola University, La Mirada, California and became a social worker.

Her love for the harp resurfaced again as an adult, and Karen began studying with Alice Chalifoux and Laura Erb in the Cleveland area. A summer was spent in Camden, Maine at the renowned Salzado Harp Colony for concentrated lessons. Later she returned to college at The University of Akron to study music. She has also furthered her education at the University of Oslo, Noway, Bowling Green State University, and Lorain Community College.

Karen has produced eight harp recordings and one piano recording which are distributed internationally through her company, Harpgate Music Productions. Her distributing enterprise has also grown to include recordings by other instrumental music artists along with gift items.

Karen has performed throughout the country and has been a keynote speaker for many Christian conferences. Her music is on the play list of a nationally syndicated radio program. Westgate is also an adjunct instructor of music at Terra Community College where she teaches Harp Studies and directs the Terra College Harp Ensemble.  She has played at countless weddings, banquets, anniversary parties, birthdays, and more.

In 2002, Karen was honored with being inducted into the Fremont Ross Music Hall of Fame. She is a member of the Erie County Chamber of Commerce, The American Harp Society and The Northwest Ohio Harp society.

Email ThisBlogThis!Share to TwitterShare to FacebookShare to Pinterest
Home